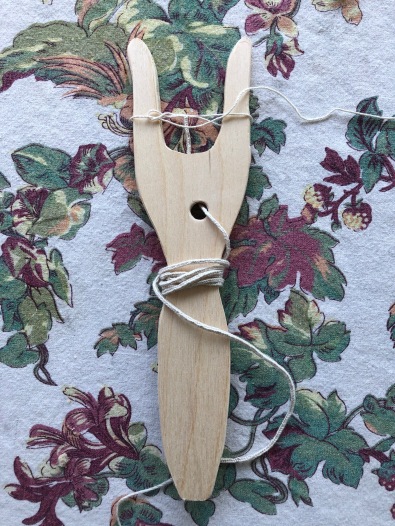 The lucet, also known as the lutal, chain fork or lyre (resembling a miniature musical lyre), is an ancient tool used in cord making, braiding, plaiting, and rope work. The lucet is believed to date back to the Viking and Medieval periods.

Lucet cording was used on clothing as drawstrings and button loops or to hang things from belts in the Viking Era. It was used as ties on doublets and hose in the Middle Ages, as lacing on “boned bodys” (or bodices) in the Elizabethan Era, as ornamental frogging, cording for stays or jumps and as drawstrings for chemises/shifts in the 18th Century, and right up to the Victorian Era as silk cording for neck chains and watch fobs.

From archeological finds and literary descriptions, the lucet declined after the 12th Century, but was revived in the 17th Century. Once machine-made cords came into use in the 1830’s, the use of the lucet diminished. It had a few revivals though, first in the Mid 19th Century, and then in the Edwardian Era (1900 – 1910). Today, due to more information and interest in the weaving world, the lucet is making another comeback. Lucet cording is the birthplace of bag ties, eyeglasses cords, shoelaces – the list is endless.

The small hand-held lucet was normally made from wood, horn or bone, but some were carved of ivory, mother-of-pearl or tortoiseshell for wealthier women. The shape of the lucet had two prongs at one end and either a handle or no handle at the other end. A hole which allows the cording to be pulled through was sometimes located either on the handle or centered at the base of the prongs.
The type of lucet cording was usually made out of natural fiber, such as wool, linen or cotton, but particularly any material or color could be used. The lucet produced a square, strong and slightly springy cording. It closely resembles knitted I-cord or cord produced on a knitting spool.

The basic technique of using a lucet is easy with quick results using one continuous thread to make a braided cord. After this basic technique is learned, intricate patterns of 2 or 3 different colored threads and twist stitches can be employed.

The cord used to lace some of the stays in the Hyland House collection was crafted with the use of a lucet tool. To make cording using a lucet, click on the following links for directions:

How to Make a Lucet Tool

How to Braid a Cord on the Lucet Tool